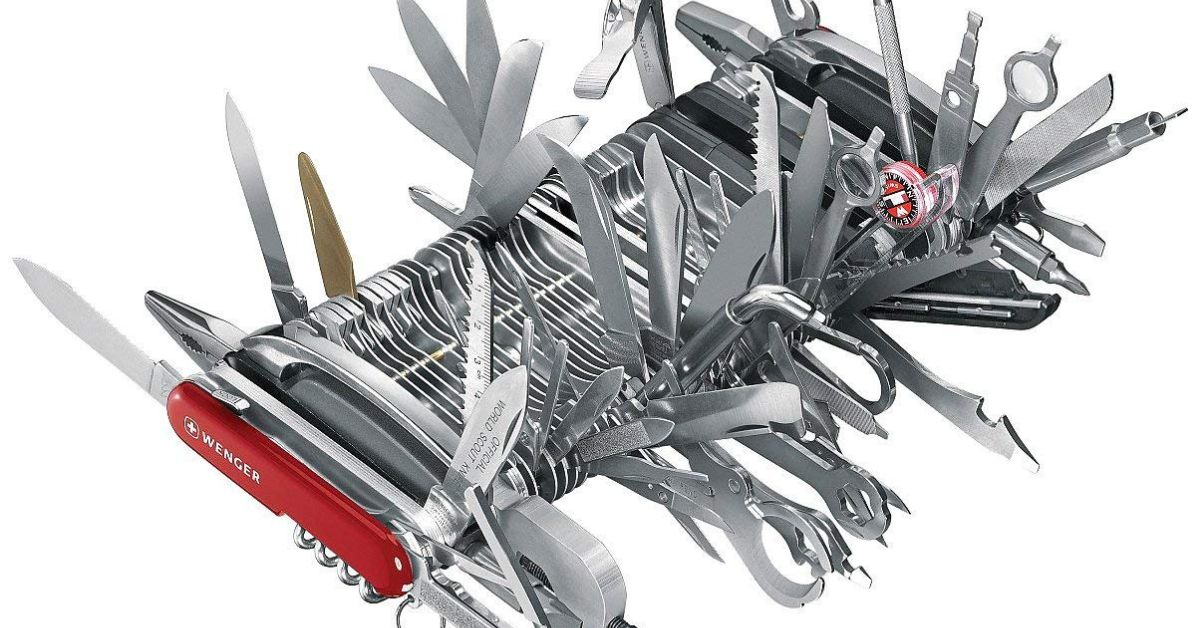 The Wenger 16999 is the Swiss Army Knife for Swiss Army knives. It is an absolute beast of a knife, a kitchen sink of a knife, boasting no less than 87 different components that supposedly perform 141 functions. It's over-preparation incarnate, and weighing in at seven pounds, it's less a pocket knife and more the sort of thing that should come with wheels on it so you can tow it behind you.

As much as it's anything but practical, the Wenger 16999 is also perfect fodder for comedy. Folks know it, too, and on Amazon, people have been leaving the greatest reviews.

"So far I've only opened about half of the things on it and taped it to a Roomba, it's been making small repairs around my home while in at work. Next project is to lock it in the garage with the car."

The testosterone is strong with this tool, apparently.

"Received this knife as a gift for my 18th birthday. Wish I'd have known what it was because as soon as I touched it, I grew a mustache and became a Navy Seal. Mom fainted and my dad laughed and handed me a beer. I was born a girl.

"Minus two stars because my breasts were really nice."

"As soon as I found out how much my husband spent on this, I left him. Bad move. It represented him at the divorce hearing. I now pay $10,000 a month in alimony."

"I accidentally left this knife in the glove box of my wore-out '67 Chevy truck overnight. Miraculously, the knife fully restored the truck and drove it to the store then returned with two [women] and a cooler full of beer."

They really should put a warning on the package about this.

"Beware! I took this knife out of the package and my girlfriend immediately became nine months pregnant, and birthed a full grown man with a beard who calls himself Chuck. It's been a transition but we're making our little family work. Added one star because the apple corer is phenomenal."

If only it paid the credit card bill by itself, too.

"I didn't even order this knife. Somehow it ordered itself... I'm so confused right now."

Who wouldn't be on board with this?

"When I forgot to take it out of my backpack before trying to board my flight the helpful TSA agent at the security area pointed out that by deploying the two larger blades and the jet engine on the back side I really didn't need a commercial flight, just a runway and some goggles. Boy, did I feel dumb, but I saved $605 on airfare!"