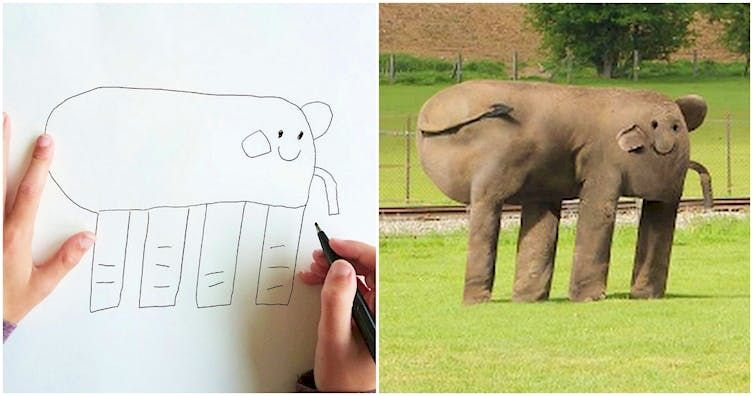 A six-year-old boy from the U.K. named Dom and his little brother, Al, have been drawing pictures of the things that they see around them, and then their father takes those pictures and photoshops them into reality.

The account has over 90,000 followers who delight in the creations of the boys and their father. The success of their father-son fun has been overwhelming for the family with Dom and Al's dad posting, "We could never have predicted that our little project could have gained so much attention over such a short space of time. I just wanted to thank everyone so much for all the brilliant comments and support."

Every post is accompanied by a little poem or quote that correlates to the drawings. It's adorable! And trying to guess what the pictures are is a great way to take a little break during your day!

This building that Al drew in London, England. 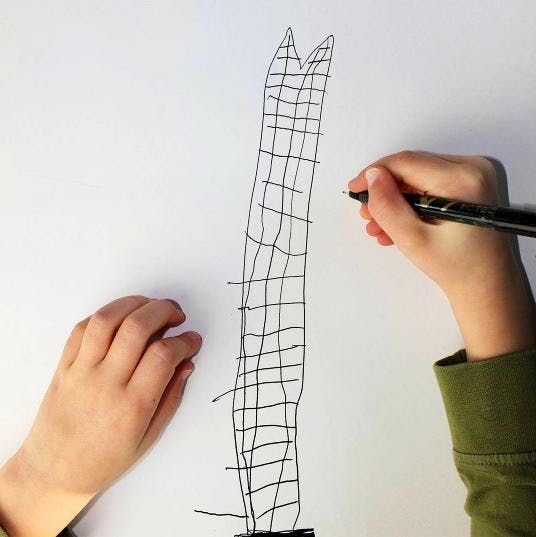 "Al loves tall buildings, but one thing is clear,

We live in a village — there are no skyscrapers here,

Surely us finding a tower’s not hard,

So we went down to London,

The Shard, which used to be known as London Bridge Tower, is the fourth-tallest building in Europe. 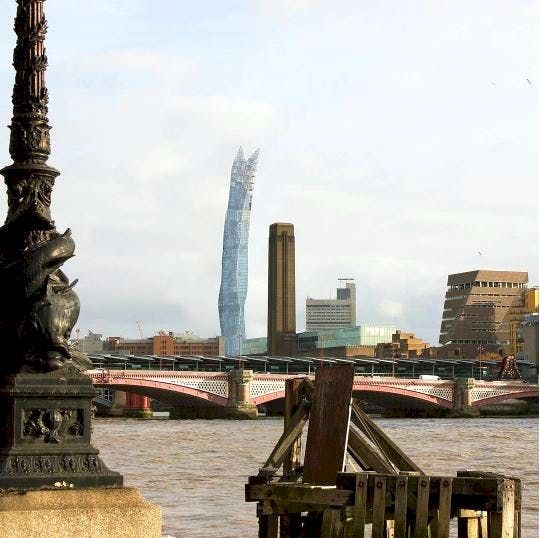 "Here's the real Shard stretching up to the sky,

It's all made of glass — just look at those windows,

Al's good but he couldn't have drawn all of those."

Little Al's drawing of a frog. 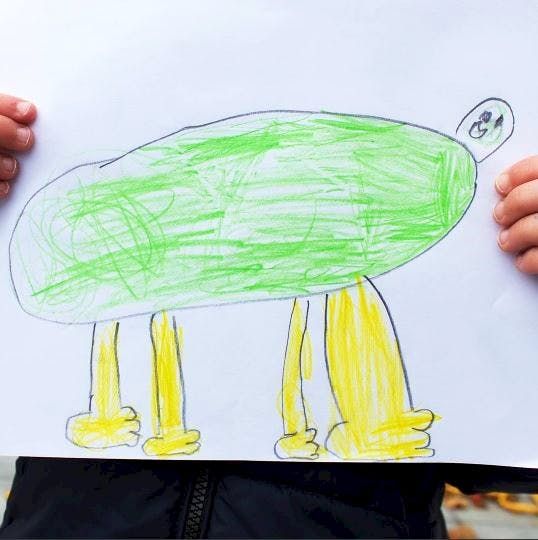 "It's Alistair's turn, so here is his frog,

Or is it a green and yellowy dog?

Perhaps it's a lizard with a really small head,

Enough guessing — let's wait for the photo instead..."

The most darling recreation. 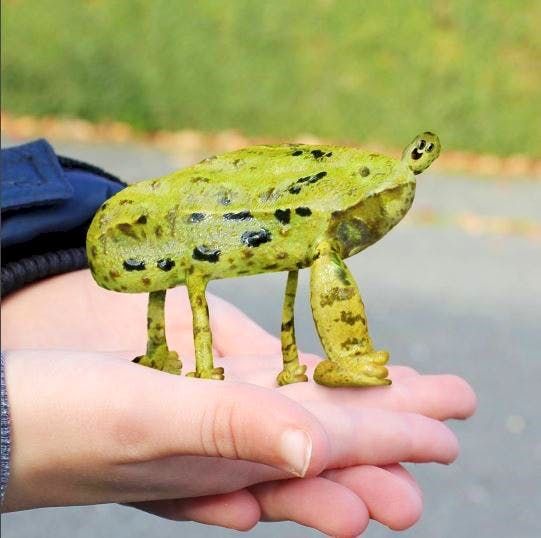 "Al says he found this by the side of the road,

But frogs are all slimy and toad skin is rough,

What could this creature be? 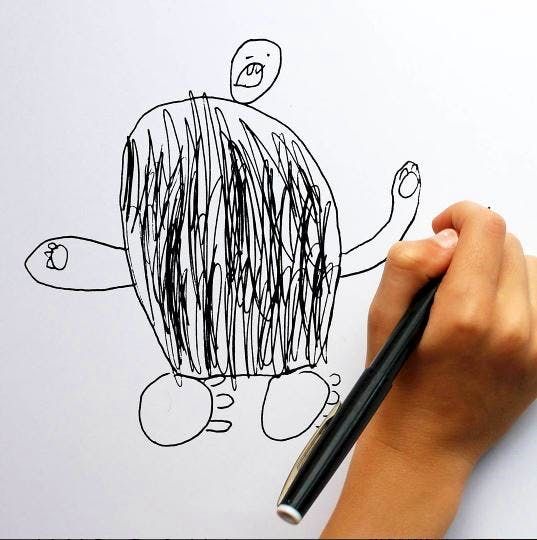 "Is this a drawing of a creature I've seen?

Or maybe a monster for Halloween?

Whatever the case, you'll quite soon find out,

Dom's drawing of a bear (which is actually a little scary)! 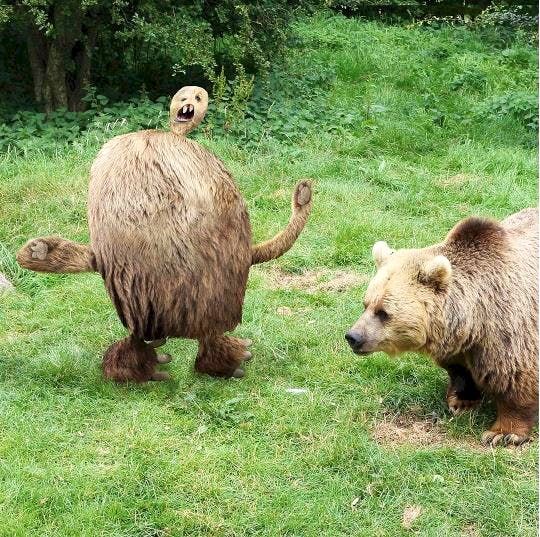 "So here is my creature from a scary nightmare,

This thing, which could either be a dog or a horse or a camel. 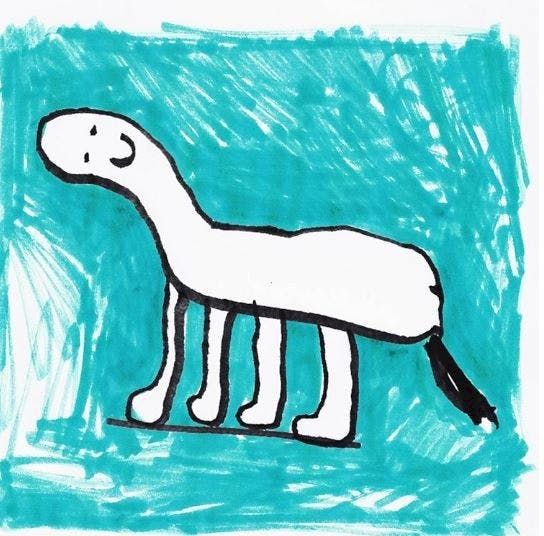 But wait till you see what photo comes next,

(I've colored around it in a greeny-type blue. All because I want to give you a clue)." 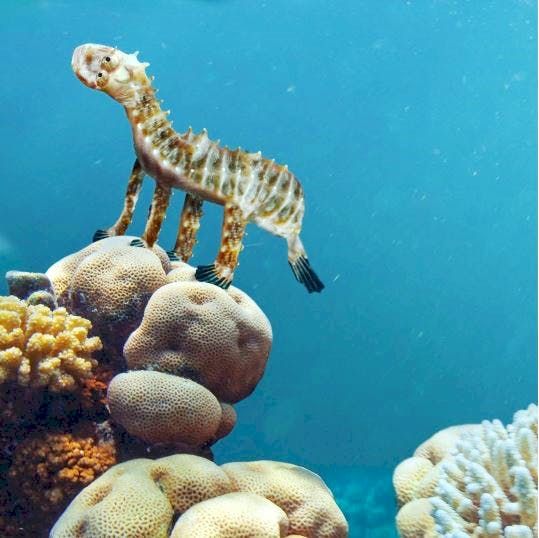 A seahorse I found in a book of the sea."

This rocket, which is actually quite good. 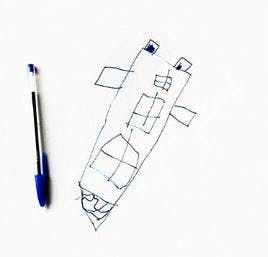 "My brother Al wants to travel in space,

So [he] keeps drawing rockets all over the place."

As evidenced by the fact that it actually looks like a rocket! 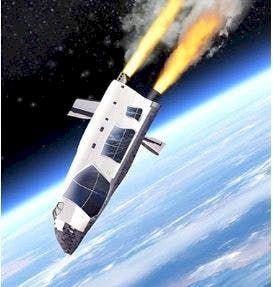 "Here is the real one, flying up through the stars, 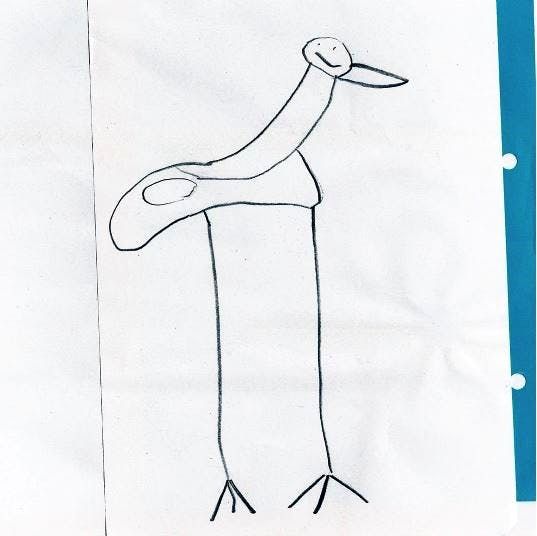 That this is a picture of a pink flamingo."

Honestly, he's not too far off — they are strange looking creatures! 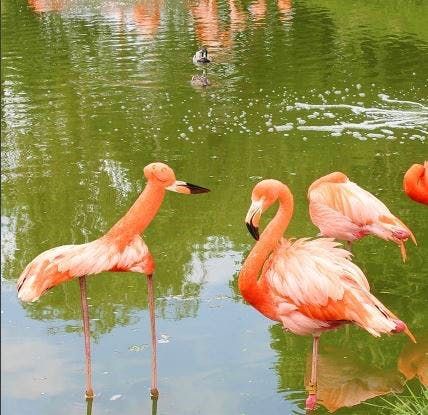 "My drawing is more real than many might think,

A bit of a grump here. 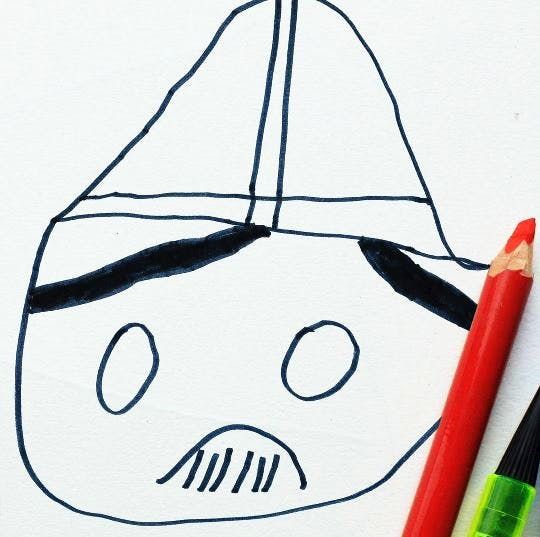 "I could have done research and copied instead,

But decided to draw this off the top of my head."

But of course he's grumpy — he's a Storm Trooper! What little boy doesn't like Star Wars? We should have known. 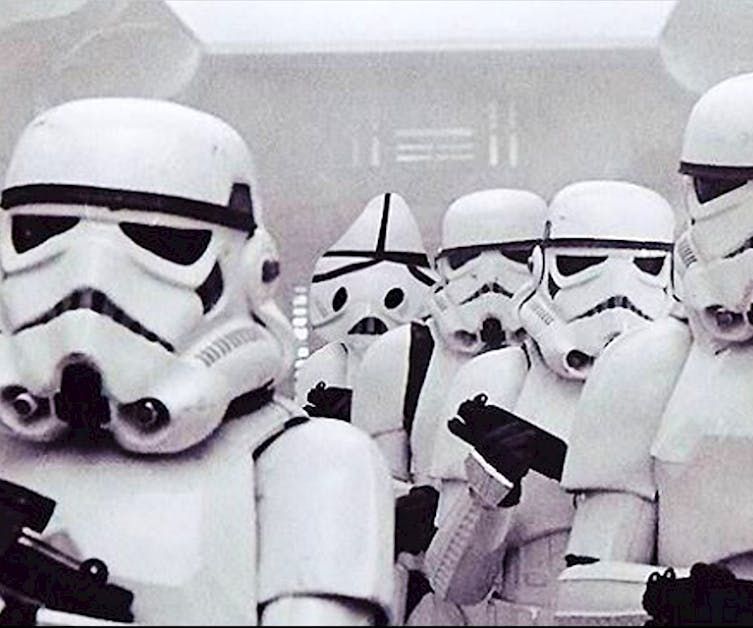 "His helmet's a bit different, but is still white and black,

(I was drawing the one you can see at the back)."

This is an excellent depiction of a boat. 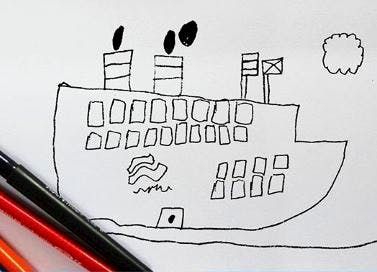 It's amazing how a kid's imagination can change their perception of things. 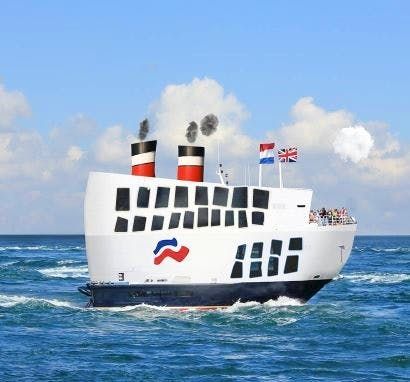 "It had hundreds of windows as you can see,

You have to love how all these animals have a great big smile. 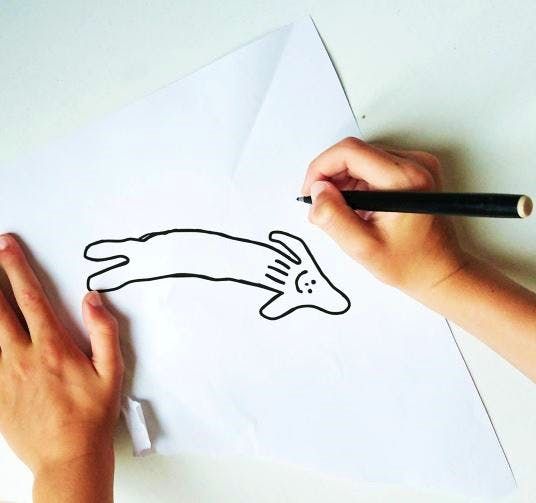 "Here's a drawing (I've since thrown in the bin),

It's clearly a shark, but just look at that fin!" 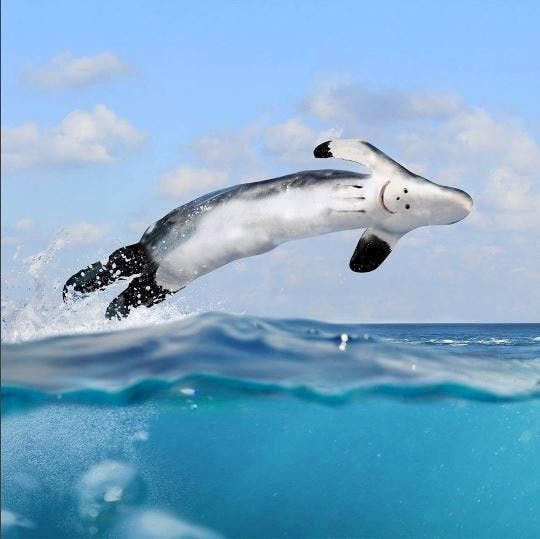 "Is it a Reef Shark or perhaps a Great White?

One thing's for sure, I drew it just right."

It doesn't really rhyme, but I'll give it to them anyway. It's not like the poems are the main attraction here. 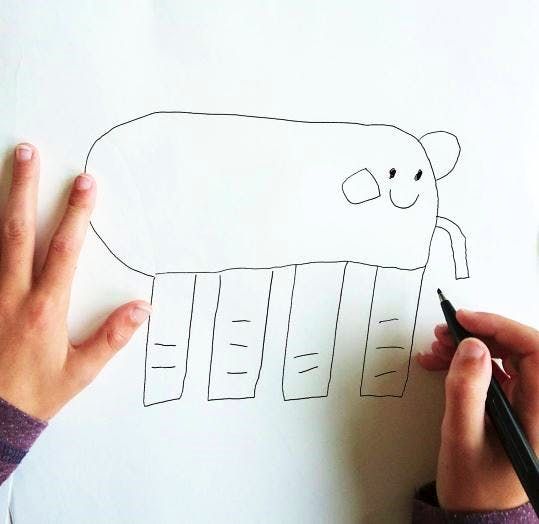 "Of all the creatures I've shown you before,

The elephant is definitely my favorite to draw."

What this dad is doing for his kids is adorable — and really validating their artistic skills which should keep them motivated. It's great! 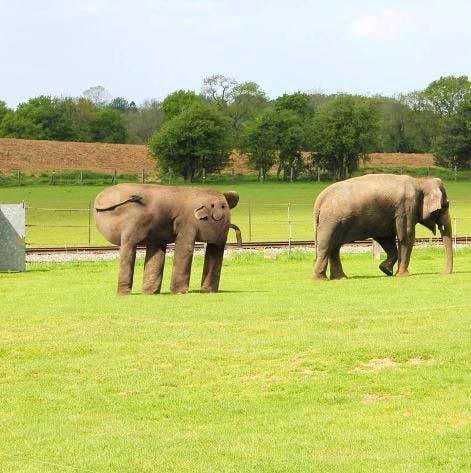 "If you've not seen my drawing, you should certainly look,

And compare with the elephant in this photo Dad took."

This little thing looks like he's just asking for a hug. 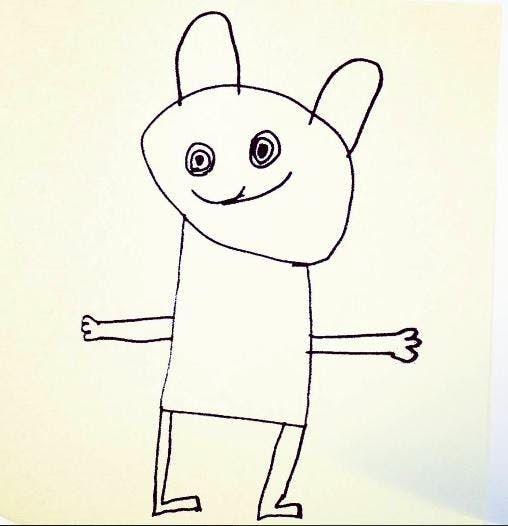 "Time for another — and a bit of a quiz,

Here's my friend's pet — can you tell what it is?"

A bunny rabbit. So I'm probably wrong about the hug thing. 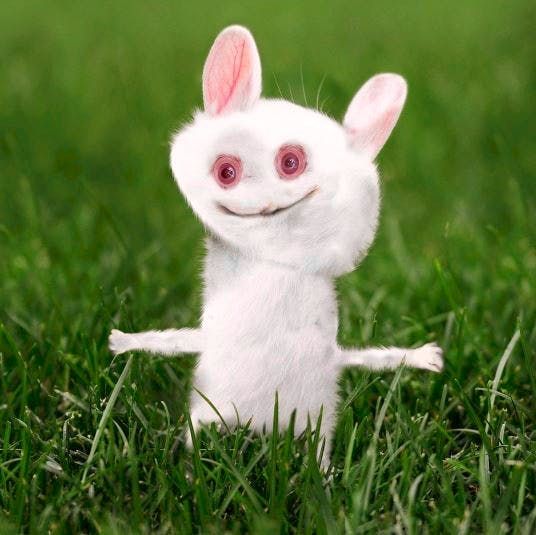 "It's a rabbit of course, although his ears aren't that long,

If I'd drawn them longer, it would have been wrong." 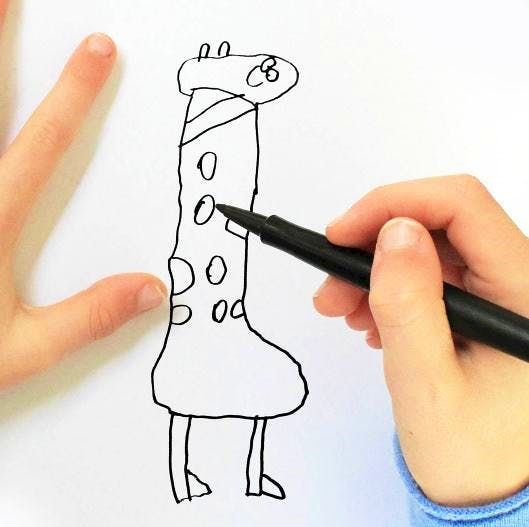 "After drawing my lemur, I went back to the zoo,

Can you tell which animal I then went and drew?"

The other giraffes don't seem to want to have much to do with him. 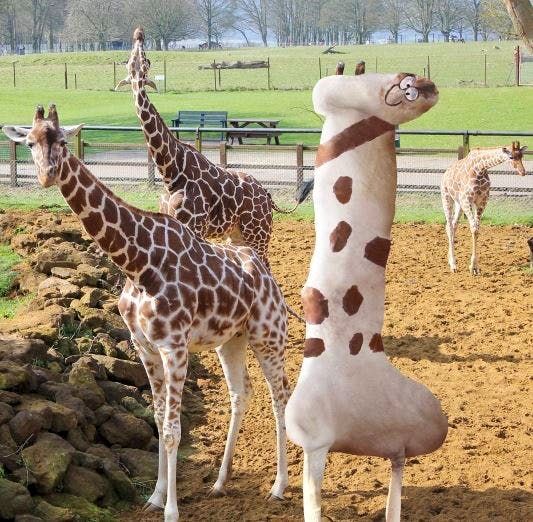 "I know you might think that I'm having a laugh,

Well I'm not because this is an actual giraffe."

This little fishy is adorable! 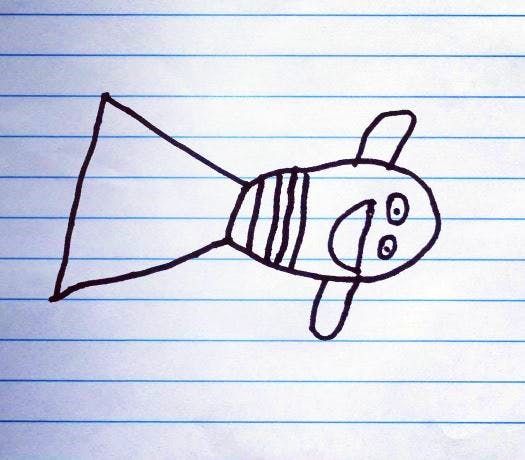 "The city aquarium — that's where to go,

To draw a real clownfish a bit like Nemo." 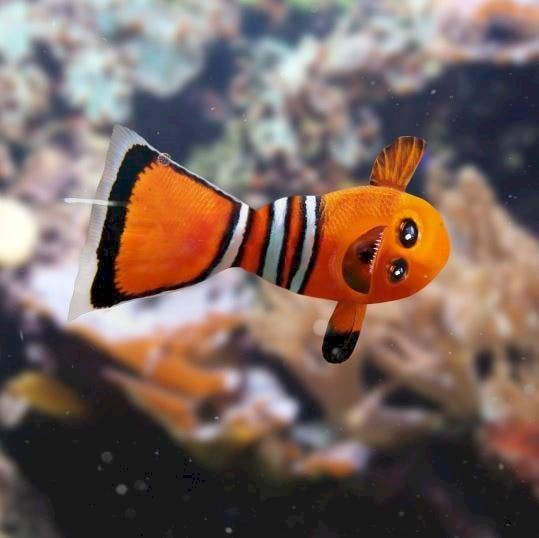 "It's sometimes too dark to see what lies beneath,

But I drew him just right, except for his teeth."

How could he ever be sad about this? It's awesome! 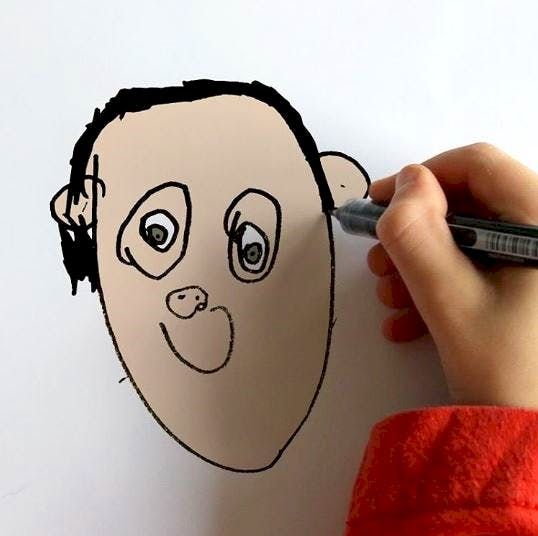 "Here's a drawing I've done of my dad,

I've drawn him just right so I hope he's not sad."

I guess this is as much of "Dad" as we'll ever get to see — the family is keeping pretty quiet about their identities. For good reason, they'd be harassed on the streets and asked to draw! 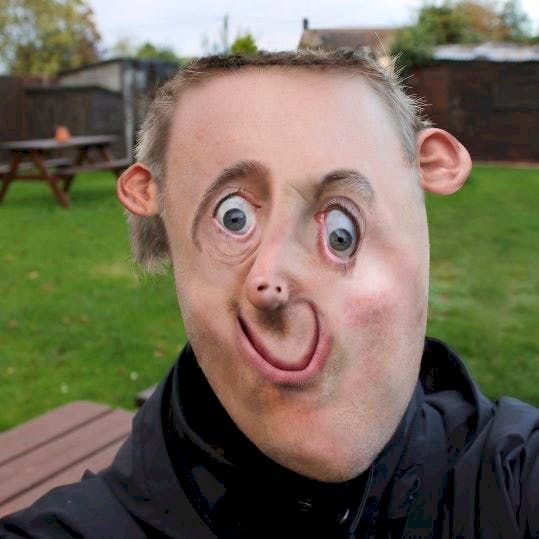 It's mainly just bumfluff so looks a bit weird."